peter booker - Thu 03 May 2007 13:15:07 Further to my earlier request for help I can report that my boat is now happily afloat with the drop keel down. Only problem is that I can't get it to stay connected to the small piece of wire/chain and lift it up. The keel appears to be stopped from falling completely out of the bottom of the skeg by a lug on the aft edge of the plate (established this when the boat was raised off the trailer in the drive). I think either this lug is corroded and there isn't enough "meat" left on the plate for it to positively connected to the wire/chain or there is some other problem.
Has anyone any information of the position of the pivot bolt and do you need to remove the keel completely to undertake modifications? Any assistance would be gratefully received.

Alan - Sun 06 May 2007 23:09:08 There is a bolt threaded into the keel at the forard end. It is resined in so you need to scrape some pait off to find it . mine is on the starboard side. once that is removed the plate will move down and forard releasing the lug at the aft end.
The biggest job is getting enough room under the keel. I have done it 3 times when rust has seized the plate or when there is damage.
once I careened on the mud - winched the mast down to a buried anchor 'till the keel was clear.
I've hung it off the quay at Castletown, I of M. with lots of help from Harbourmaster and other sailers.
and Ive jacked it up above it's previous trailer (very risky and unstable). The new trailer has a facility for lowering/removing the keel supports so I can drop the plate.
After buying the boat many years ago I found 2 keel bolts were rotted through. It's worth checking those. they are glassed over in the bilge.
Hope this helps.
I tried to attach a drawing (jpeg) but I'm not sure it worked.
Alan 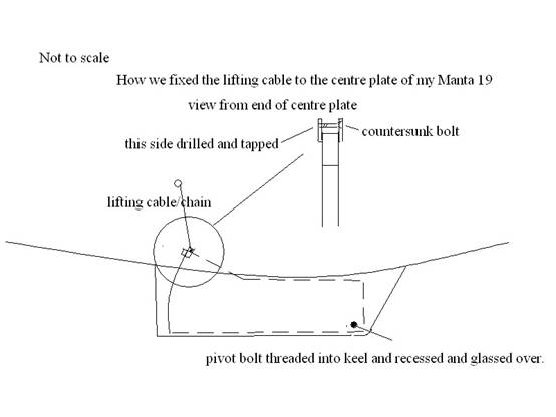 Many thanks for your kind response and apologies for the delay in getting back to you. Very helpful advice however I think I will avoid the shallow bits of Windermere until I take the boat home again later in the year. I had difficulty getting sufficient height too and with the help of a stck of paving stones and timber only succeeded getting the plate to drop far enough for the lug to catch on the aft part of the stub.

I still find it hard to understand why the loop and chain system was originally used and a more robust method not provided at the outset? Anyway thanks again, I shall update later in the year.

Alan - Sun 13 May 2007 09:24:19 Good luck when you try.
The lug at the aft end of the plate (if plate and keel are in good condition) will only come out when the pivot bolt is removed and the plate dropped at the forward end, or the plate moved forward slightly.
When we did ours we raised the aft supports on the trailer as high as they would go to get the keel clear.
I hadn't realized you were on Windermere so use of the tide and drying out on mud isn't much use to you.
We used to sail from Roa Island and will again after some repairs. Our last lake sailing was on Coniston.
Alan