The River Cam runs approximately north from Cambridge, becoming the Great Ouse shortly before Ely and then on until it meets tidal water at Denver Sluice. I had a plan to lock out through the Sluice and turn sharp left into the New Bedford River or Hundred Foot Drain which would give a twenty mile, dead straight sail, south west to the village of Earith with a manageable number of bridges to negotiate. From Earith there is a somewhat tortuous route along the Old West River, rejoining the River Cam south of Ely. The trip would take three or four days, depending on tide times. All I needed was a weather forecast with the wind somewhere between north west through north to south east, and this seemed to be likely for several days in the last weekend of June.
I needed a rising tide on the New Bedford River and the Denver Lock Keeper advised that he could lock me through at 7.30 on the Monday morning to meet the first of the flood tide. That meant spending Sunday night at Denver, which was fine, though the Jenyns Arms pub had not yet re-opened. I therefore planned to take two days to reach Denver, the Saturday exploring the River Lark, the first navigable tributary of the Great Ouse below Ely and the Sunday returning to the Great Ouse and sailing to Denver.
This would be my first trip living on board Red Herring, which I don't think anyone had done before, so I had equipped her with a one-burner gas cooker, a kettle and small cooking pot, cutlery and crockery for two people, washing-up bowls and brush, and a chemical toilet. I had also prepared food which would be easy to cook on a one-ring burner and plenty of salads, etc, which would keep reasonably fresh in a cold bag. It was going to be something of an adventure on a very small scale.
I left the Cam Sailing Club at 10.20, lowered the mast and passed through Bottisham Lock. The wind was in the north-north-east, so on the nose for most of the time; I hoisted a sail for the sake of appearances, but it was really just motoring. A very busy Ely with its clutch of bridges and multitude of hire boats was neotiated at lunch time and I reached Queen Adelaide at the start of the long straight where the 2021 Oxford and Cambridge boat races were held.
The entrance to the River Lark is some two miles along this straight, but I didn't raise the mast as I was still heading directly into wind and at the mouth of the Lark there was a road bridge. The Lark runs generally south east, so I set sail, lifted the outboard and managed a pleasant sail for a couple of miles before lowering the mast again to pass under the two very low bridges in Prickwillow. With mast up and sails set again I set off on a broad reach along the five mile straight to Iselham Lock. There were five power cables that crossed this stretch of river, but all were shown on the map as having a 10 metre clearance, just like the ones my 7.8 metre mast had passed under with no problem on the Cam and Great Ouse. However, after four miles, as I was negotiating a passage through some trees which over-hung the river, I suddenly saw among the trees a pair of cables which were very definitely less than 10 metres above the water. It was too late to turn back and there was nowhere else to go. For a few seconds I considered the interesting question of what would happen when an aluminium mast connected a power cable to the river. The answer was, nothing. Either the cables were not live or there was some sort of break-before-make system which prevented any electrical short. Red Herring came to rest with her mast jammed between the two parallel cables and also caught in a large tree. Feeling somewhat relieved I started the motor, dropped the mainsail and partly lowered the mast so that we could free ourselves from this muddle.
A mile later I came to Isleham Lock, which requires the full procedure even though the difference height is only about a foot. After that the over-hanging trees became lower and lower until I was obliged to lower the mast once again and motor carefully on to the limit of navigation at Jude's Ferry, now a road bridge and a thriving pub. Here I spent the night, eating supper at the pub and grateful for their facilities. I had lowered and raised the mast seven times during the day. 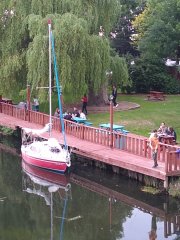 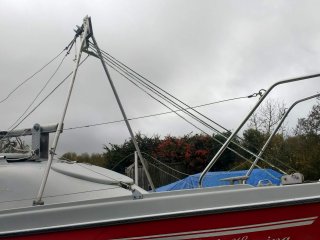 On the second day, a fine and sunny day with a moderate breeze, I retraced my route along the River Lark,carefully avoiding raising the mast until after I had passed the low wires, and had a pleasant and moderately demanding sail along the edge of the no-go zone for much of the way. When I had lowered the mast again at the point of rejoining the River Great Ouse, I realised that I had a choice to make. If I followed my original plan and went to Denver Sluice I would be motoring into wind all day, and for the following two days rain was forecast; if I turned left and went back through Ely to my base at the Cam Sailing Club I could have an enjoyable passage, sailing downwind for much of the way. So that's what I did, lowering and raising the mast six times, and leaving the expedition through Denver Sluice to another day.
Here ends the mini-saga of Red Herring's adventure on the Great Ouse and its tributaries.

mhsorens Mon 19 Jul 2021 19:22:23Sounds like a great adventure - and a lot of mast lowering. What sort of mast stepping device do you have? I made a wooden A-frame for supporting my mast's against sideways movement, but it's of no use in a strong breeze, pretty clunky and takes up space in the cabin.

Red Herring Tue 27 Jul 2021 22:36:41I have an A-frame, custom-built in stainless steel by an earlier owner who worked at the Welding Institute and was therefore very good with metal. It includes blocks to give a 4-to-1 pull, which helps greatly, plus a form of secondary shrouds, set to remain tight as the mast lowers, thus preventing sideways wobble. I am happy to give more details if you want.

Red Herring Wed 28 Jul 2021 17:05:12Here is one taken during the first weeks of my owning Red Herring. I can probably find more close-ups, but they are often hard to interpret.