Following my earlier aborted attempt to sail up the New Bedford River at the end of June 2021, I still hankered after trying again, so the prolonged period of northerly winds at the end of August provided the ideal opportunity.
I left the Cam Sailing Club at 10.55 a.m. on the Saturday of the Bank Holiday Weekend, 28th August, and motored into wind down the River Cam/Great Ouse. While raising the mast after Bottisham Lock, the first obstruction after leaving the Club, I heard a bang and thought little of it. Then I noticed that the pivot pin on which the mast rotates had snapped: one part remained in place, and on that the mast rested; the shorter part was lying in the scuppers (fortunately not in the river). I considered my options, from turning back home and giving up, to pressing on regardless: neither was attractive. So I decided to carry on to Ely and see if I could find a replacement pivot bolt, either in a marina or in Cutlacks, the excellent ironmongery and hardware store in the town. After a careful mast lowering at the next bridge and a long motor, mast down, into Ely I came alongside in the middle of the town. Cutlacks did indeed come up with the wherewithal and after fitting it I set off again, much relieved, and motored the 3 hours remainder of the journey to Denver, arriving at 6.40 p.m.
Overnight on board with no shore-based facilities was not a problem and the following morning I rigged the cruising chute and checked that I could lower and raise the mast with it in place. I passed through Denver Sluice at 10.20, the time recommended by the lock keepers, and emerged onto the tidal River Great Ouse/New Bedford River. It was shortly after low water and the flood was surprisingly strong. I hoisted the mast and set the main, avoiding the big sand bank below the sluice, before turning south-west down the New Bedford River or 100’ Drain, switching the motor off and deploying the cruising chute.
There followed the most glorious 5-mile, dead straight run, with the tide and before a Force 3+ north-easter, until the footbridge at the Welney Wildlife Trust hove into view. And that’s when the fun started.
First, I mis-judged how close the bridge was; next I mis-judged how strong the tide and following wind were; then I failed to appreciate that, shortly after low water the 100’ Drain was actually only about 25’ wide at water level, too narrow to permit a 19’ boat to turn round into wind. Never mind: there is a perfectly good technique where you run the boat aground on the windward bank and hold her there with the motor while lowering the mainsail and mast – only on a dead run there isn’t a windward bank, and the bridge was rapidly getting closer. I had already sold Red Herring and had horrid visions of handing her over without a mast, but eventually I found a tiny nick in the bank and ran her aground there. With sail and mast down, I started to reverse out of the bank, only to have the stern gripped uncontrollably by the flood tide so that I passed under the bridge stern-first. Lord knows what it looked like, but we survived.
With an improvised technique using bank, wind and the tide I managed to turn round and, somewhat chastened, motored the next mile to the Welney road bridge. I was getting better at the windward bank method and raised mast and mainsail without too much difficulty. The tide was lessening, the river was getting wider and the next 3½ mile sail to the Meccano-style railway bridge was uneventful and equally enjoyable. After that came a beautiful 6-mile stretch at slack water as far as the Mepal Farm bridge, a 1-mile motor to the bridge by The Anchor at Sutton Gault, now sadly closed, and a final 3½ mile sail to Earith where the New Bedford River ends.
I locked through Hermitage Lock at 5.10 p.m. having travelled 20 miles in 6 hours and raised and lowered the mast 5 times. I was ready for a rest, supper on board and a glass of something, which I raised to the memory of the wretched Scottish prisoners of war who had been forced to dig that huge ditch for private profit in the middle of the English Civil War.
That day’s sail was what it was all about. After a comfortable night alongside at Hermitage Lock, the use of the Environment Agency shower and loo and a good breakfast, I set off along the Old West River, the tortuous remnant of an earlier version of the Cam. I sailed for half an hour but then heeded the lock keeper’s advice, lowered the mast and motored, avoiding trees and the many motor boats which were blithely ignoring the 4 mph speed limit. Eventually I re-joined the River Cam at Pope’s Corner and turned for home, raising the mast after Dimmock’s Cote bridge and enjoying one last sail before reaching Bottisham Lock and the Cam Sailing Club.
So it was done: 75 miles covered, the mast lowered and raised 9 times, an ambition achieved just before I handed over Red Herring to Martin Brooks, a fellow-member of the Cam Sailing Club. Please make him as welcome as you have always been to me. 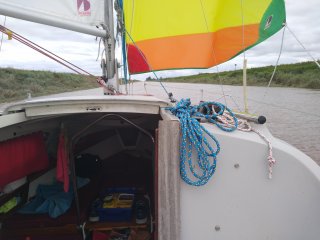 Smanta Tue 28 Sep 2021 11:49:38That sounded a great little adventure i followed with the help of google maps.. Sorry to hear you are selling good luck for the future