Sophie is a Manta 19 Trailer Sailer built by Blakes Marine in 1983. She is number 1239 and I believe that she is the penultimate boat built by Blakes and was intended for the managing director. Unfortunately he had no time to sail her and after 2 years, unused, she was sold on to be launched in Windermere by a Leeds man.

Two years later she was up for sale again and a Malvern man bought her to be sailed on the River Avon at Tewkesbury.

After 2 more years she was prepared to go to sea for the first time but the owner was striken with a serious illness and had to give her up.

Her former owner from Kidderminster, kept Sophie at Tewkesbury for 2 more years before finding Clywedog Reservoir in Mid-Wales. Sophie remained there for 8 years but unfortunately her owner suffered a heart attack and was forced to sell her. 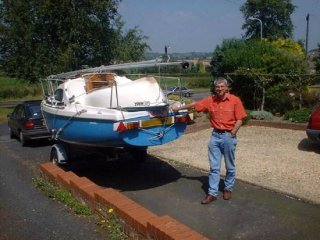