The summer seemed to be slipping by pretty fast and for one reason or another we had not managed to get any more sailing done so Anne and I decided it was about time we had a long weekend at Rutland. The forecast was looking good and to avoid the hussle and bussle of our last outing we decided on the weekend before the August bank holiday.

As per usual it took longer than anticipated to get everything ready. Somehow we always seem to think of extra things to do that always take longer than we expect. I must get around to making a more comprehensive list. Still, we got to Rutland at 1530 and had Sophie rigged and on the water by 1700. It was a beautiful evening and we set sail at 1710 with a force 2-3 breeze, plenty of sunshine and a cool box full of beer. We had a really pleasant sail with a local station providing background music on the car radio that I fitted the week before. 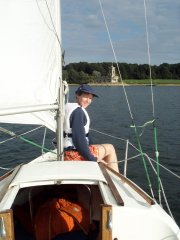 We had a beer each that slipped down a treat and we eventually made our way back to Whitwell Creek, tying up a little after 1900. We started to prepare our tea (tuna paella with sweetcorn) and the wind died away completely leaving the surface like a mill pond ruffled only by ripples from the occasional zephyr. 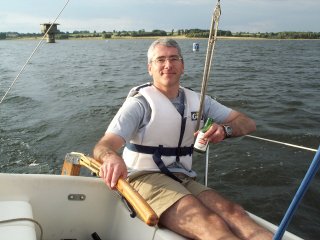 We had a shower and washed up before the Whitwell Water Centre closed and afterwards watched the sun sink below the horizon as we sipped a glass of red wine. 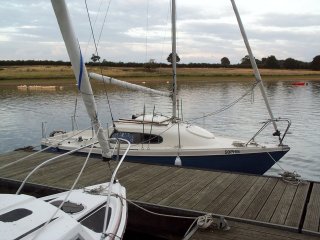 We settled down for a good night's sleep and were wakened only once at about 3 in the morning by the sound of small waves, driven by a light wind, that were slapping gently on Sophie's stern.

I awoke at 0730 and peered through the curtains. The sky was a clear pastel blue and the water was sparkling in the early morning sunshine. I got up and went for a walk leaving Anne to snooze a bit longer. 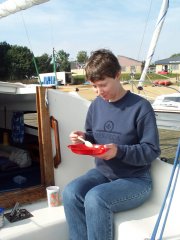 I got back to Sophie just before 0900. Soon the kettle was on and we both sat in the cockpit enjoying breakfast.

We got washed, tidied up and slipped our mooring just after 1030. Anne took the helm and we sailed along the northern shore to the limit of sailing near the Barnsdale Hotel and Country Club - very plush looking place!

We had arranged to meet Gareth from my work at 1300 so at 1200 we turned around and beat back to Whitwell. The wind freshened to a force 3-4 and we had a lively sail, stepping onto the pontoon just before 1300. 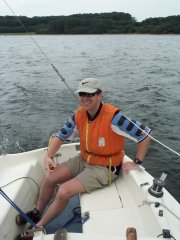 I swapped the genoa for the jib while Anne started getting lunch ready. Gareth appeared and at 1400 when our lunch things were packed away we slipped our mooring once again this time with Gareth at the helm. He had not sailed before but with Sophie's gentle manners he soon got the hang of it.

We sailed along the southern shore watching some squibs racing and returned to our berth at 1630. We said goodbye to Gareth and then Anne and I went for a walk to the Butterfly Centre. When we got there it was shut so we walked along the main road to the Noel Arms to book a table for our tea. After a thirst quenching pint we went to get showered and changed and returned ready for our food.

They seemed to be short staffed and we had a very long wait for our starters and an even longer wait for our main courses. Maybe it was a ploy to make me drink more beer! The food was very good but next time we'll go somewhere less busy.

We walked back to Sophie at 2230 and settled down for the night.

We awoke to a gloomy grey sky and the sound of a brass band somewhere in the distance. We had cornflakes and tea in the cockpit with a bit of entertainment provided by a little red dinghy that was trying to sail out from the shore with our pontoon a few yards away on his lee side. I was going to give him a hand but someone else appeared and helped to push him out from the pontoon leaving me to finish my cup of tea.

The clouds got a lighter as the sun tried to break through. Two canoes with about 20 crew in provided a bit more entertainment as they started to do short races starting just past the end of our pontoon. Not sure what it was but it went on for the whole morning and the brass band by this time was playing Hawaii 5 O for them. 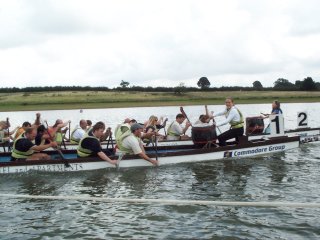 At 1030 we set off for our final sail, staying around the area nearest the dam. When I had lowered the keel centre plate that morning the lifting chain had gone slack before the plate had gone fully down. So while we were sailing I rasied and lowered it a couple of times and it seemed as though it was sticking for some reason. I raised it again and with a twang followed by a clonk, the handle came off complete with it's chain. The centre plate was still there and my only worry was whether we would have a problem getting Sophie back onto her trailer.

We sailed around a bit longer then made our way back to the pontoon at mid-day. We recovered Sophie back on her trailer without any problems, de-rigged and set off back to Branston, arriving home at 1600.

It had been an excellent weekend.