The evenings were starting to draw out and it was about time I got Sophie's keel fixed ready for the new season. I had arranged to use a hoist at Morton Boats on April 19th to lift Sophie off her trailer so that I could re-attach the centre plate lifting chain. I soon realised that it was going to be a bit more of a job than simply adding new shackle. As I pulled the trailer out from under, the centre plate slid out past the stop and onto the ground. The plate was showing the signs of nearly 20 years of use; it was very rusty and getting extremely thin in some places. Paul advised that it would be better to get a new centre plate and it would only take a week or two to get a new one sorted out. 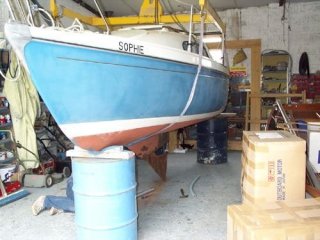 We set about finding the pivot so we could completly remove the old plate. It didn't take us too long to find a large allen bolt on the starboard side of the keel. After numerous attempts to turn it and 10 minutes of heat from a blow lamp the bolt finally gave and began to turn, or so it seemed. After a little more force the bolt head snapped cleanly off leaving the keel securely in place. 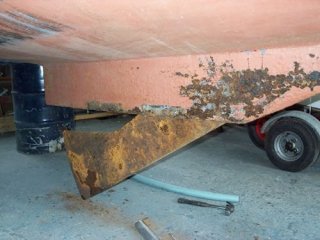 After about an hour we had drilled the bolt and using a hack saw blade either side of the centre plate, we finally managed to cut away the remains of the bolt and the centre plate slid out of the keel. An old newspaper cutting given to me by Alan, the previous owner, suggested that the Manta centre plate weighs 55lb. What was left of Sophie's centre plate was no more than 30lb. The next problem to solve was how we were going to fit the replacement. The only viable option was to drill the hole though to the port side of the keel and counter sink it to take an M8 bolt. The hole on the starboard side of the keel was the perfect size for a nylock nut.

We shook the rust off the old plate and by its flexing I realised just how thin it had become - only about 3 or 4 mm thick in places and it was very flexible. We measured the size of the slot in the keel and decided that the replacement should be made to 10mm thickness. I took some measurements for another Manta owner who had contacted me with a query on centre plates.

I left the old centre plate with Paul so it could be used as a template for the new one and if all goes well it should be ready around the beginning of May.

The new centre plate was ready on the 2nd of May and I arrranged to get it fitted the following week on the 9th of May. Compared to the old plate, the new one looked really good. It weighed 25 kg and was solid with absolutely no chance flexing. It took a bit longer than I expected to get it fitted as we had to work out how to get the lifting chain attached and align everything so that we would drill the pivot hole in the right place.Even then it was a bit sticky and was difficult to raise to the fully up position. We had to take it out a couple of times and apply the angle grinder to get rid of a few small areas that were a little bit proud. After 3 hours everything was just right and we fitted the pivot bolt and tightened up the lock nut. 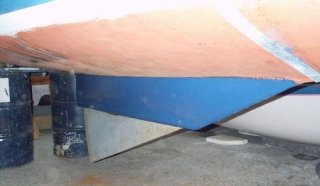 Just a week to go until the first test of the new centre plate on 17-19 May at Rutland. It will be my first sail of the year and the first sail ever for my sister, borther-in-law and niece.

tobermory Mon 19 Jan 2015 11:46:11Thank you for this- have lost keel and this is essential for new one! Diagram does not quite marry up with dimensions of salvaged keel above as it shows right angle from pivot bolt but I can rectify this. More seriously is there room I wonder for more than a 2cm lip at the other end to hold the keel in place as this seems very little with everything getting worn and enlarged? Sincerely Marcus