Sophie spent the winter laid up in my back garden in Branston and during the winter I gave her a good inspection. 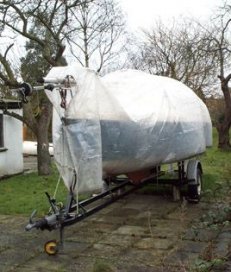 Alan, the previous owner, had looked after her really well and there was very little maintenance that needed doing in preparation for the 2001 season.

Apart from the usual jobs of sanding and a bit of varnish on the wood work, the only things I wanted to have a look at were the trailer, electrics and to redo an old repair on a bit of battle damage on the port side caused, I think, by a close encounter with a fireball at Clywedog reservoir in Wales.

The trailer needed some new wheel nuts and after a few visits to scrap yards I realised that it was not going to be an easy task finding nuts to match the thread of the studs. Also, when re greasing the bearings I noticed a bit of pitting on the surface of the ball races so new bearings were needed. There was nothing really wrong with the electrics. There was an old depth finder but the coax cable to the transducer was a bit tatty and as I had to rummage around to remove it I thought I might as well do the whole lot anyway.

The old repair was the only thing that needed immediate attention. Pressing around the existing repair forced a little water out of the cracks and if left unchecked, the freeze/thaw action during winter would gradually cause further delamination. 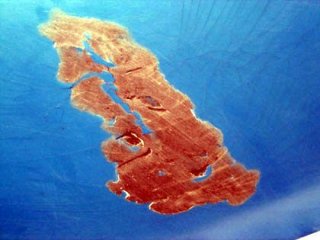 My first port of call was the local boat builders, Morton Boats near Swinderby (builders of the Morton Eagle 525). Paul was very helpful with advice on the best way to do the repair. I noticed that they had a new range of Gelcoat repair products made by Blue Gee. Sophie's hull is Cobalt Blue but the Blue Gee Anchusa Blue looked to be the right match so a bought some. In conversation I mentioned the trouble I was having getting the wheel nuts sorted for the trailer, "No problem" said Paul "Bring the hub down and I'll get new studs and nuts sorted for you." - great!

I popped back to Branston to get the hub. The Anchusa Blue was an exact match, I just need a dry spell to get the new repair done. I returned to Morton Boats with the hub and arranged to pick it up the following week.

The repair under way, cracked gel coat removed and polyester resin applied to delaminated matting. I was very impressed with the build quality of Sophie. The gel coat was a good eighth of an inch thick. 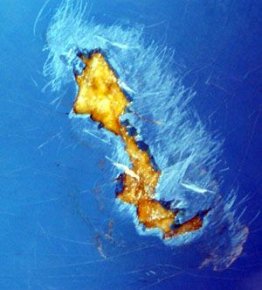 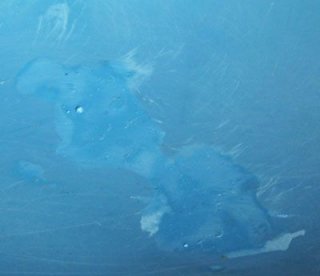 Whilst giving Sophie a clean out in preparation for the new season I noticed that the starboard side bunk cushion was wet underneath. After investigating with the garden hose I found that the window was leaking where the split in the rubber seal joined. Both windows were showing signs of their age so I decided to replace them. Another trip to Morton Boats and I had new rubber seals and perspex ready to cut and fit. If anyone wants some advice, get someone else to do it for you! Getting the new windows in was one of the most difficult things I have ever done. It took nearly 2 days and my whole vocabulary of swear words (repeated more than once) to get the job done!

The new windows look great, don't leak and, on reflection, were well worth the effort.

We had planned on having a week on Sophie at Rutland Water early in May and we also fancied a week on Windermere in July or August. It all depends on the situation with the foot and mouth outbreak as the Lake District is currently out of bounds. It could end up being a quiet year.