The weather had been superb all week and it looked like it would last out until the weekend so Anne and I decided to spend the Saturday and Sunday down at Rutland Water with the intention of spending our first night on board Sophie. We didn't need to take too much with us as we made a packed lunch for Saturday and decided we would go to a local pub for tea. On Sunday my parents were going to join us for the day and my Mum was going to bring along a picnic lunch so all we needed was something for breakfast on Sunday morning.

This time we thought we would try launching from Whitwell which is on the north shore of Rutland Water. Having checked and double checked everything we set off and arrived at Whitwell at 1 pm. We paid our fees, £7 a day (much cheaper than Rutland Sailing Club) and set about rigging which took less than an hour. Launching was a doddle as the slipway is very good and the pontoon excellent (much better than Rutland Sailing Club).

We were soon out on the water and the conditions were superb. The sun was shining, the wind was around force 3 and Sophie powered along under full main and genoa. We had a fantastic sail along the southern half of Rutland beating all the way up to the Old Hall before turning around and running back to Whitwell, enjoying a beer from the cool box on the way. After nearly 4 hours of sailing we heading back to the pontoon at Whitwell, tying up at around 6.30 pm. 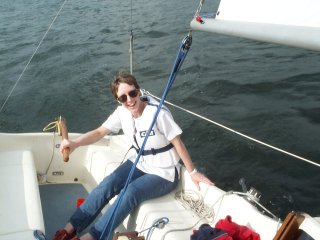 We headed off to the showers (very good) and afterwards we made our way to the Noel Arms which was a ten minute walk away in Whitwell. We went to the bar and I had a pint while Anne had a glass of wine and then we went to see about food. Unfortunately they were fully booked and it was easy to see why. The food looked excellent and this was confirmed later in the evening by the crew of another boat moored on the same pontoon. Anyway, we had another round of drinks and then made our way back to Sophie. The gate into the sailing area was stuck shut and I put our night-cap beers on the ground to use both hands to get it open. In the process I knocked the bottles over which rapidly rolled down the slope and Anne cracked up laughing at me as I ran after the jingling bottles that were accelerating towards the water. We got back to Sophie and cooked up our breakfast rations (bacon, eggs and tomatoes) for an evening meal and washed it down with a beer (shaken and stirred!).

And so we settled down to our first night aboard.

It was very comfy and cosy for the two of us. The pontoon was in the lee of the land and there was hardly a ripple to rock or slap against the hull. Once we had bedded down we quickly fell asleep although with us both sleeping on the forward V berth we woke each other up a few times with the odd kick as we turned over.

We woke fairly early to a breezy overcast day with gloomy dark clouds that were giving the occasional shower. By half past nine things were starting to brighten up. We fed the local ducks with our last slice of bread and then set off to Oakham to find something for breakfast.

My parents arrived shortly after we got back from Oakham and we climbed aboard setting off in a force 4. It was a superb sail. I had considered reducing the main a bit and putting on the smaller jib but I wanted to see how she behaved in stronger winds. I would have pushed her a bit harder but as my parents were on board I didn't want to put them off so I spilled a bit of wind from the main in the gusts. 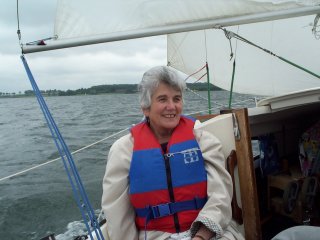 We sailed around the dam area of Rutland Water and had a look at some of the racing fleets whilst trying to keep out of the way. We reached across to the southern shore near to the museum before finally making our way back to Whitwell and our lunch. 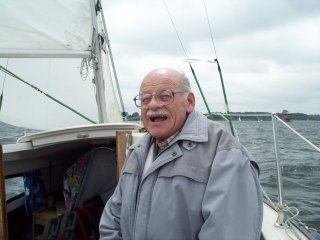 We tied up on the pontoon at 2 pm and totally demolished the superb picnic lunch that my Mum had made.

An hour later, with full bellies, we set about recovering Sophie on to her trailer and made ready for the trip home. At 4.30 pm all was secured, wheel nuts checked and we began the journey home arriving back at Branston just after 6pm.

It had been an excellent weekend the only thing was it went too quickly. Next time we need to do more preparation beforehand just to get our things stowed away and organised a bit better on board. Although we are getting quicker and more used to launching and recovering, it still takes a fair amount of time so next trip we need to allow a few more days just to make the effort more worthwhile.